My determination to use every scrap of the Quilt MN this year has led me down a path I've never taken in my quiltmaking years... absolutely NO PATTERN!!!  I seldom actually follow a pattern from beginning to end.  My general belief is that patterns are guidelines, not gospel.  As a result, my quilts are always a bit different than the pattern maker intended.  Even my own patterns evolve as I make a project.  I start with the basic concept and change things as I go along.  The final result is always different than my original idea.

So -- trying to figure out how I was going to use all these printed panels was a challenge.  I dived in with the star blocks that I demonstrated earlier but when those were finished, I just didn't know what to do.  After giving myself a headache, I decided that I am just going to piece fabrics together with no concept of what the finished product will be. 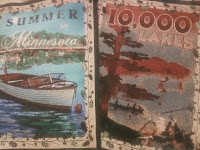 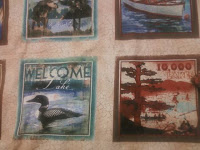 These 11" x 15" printed panels have posed an unusual challenge.  I didn't want to just put the small printed pictures right up alongside the large ones so I had to find some way to separate them.  I finally decided to just start sewing and I ended up with a row of fabric. 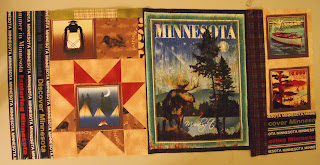 I started with the large printed panel and added blocks and fabrics to build out the row.  I will have to do some trimming and squaring up before it can actually be placed in a quilt, but it's a good start.  I found it to be a bit boring though so I decided that the next row should have more piecing involved.  What you see below is the second row constructed.﻿

This row has more interest (in my opinion anyway) and if you look closely, you will see that I used some scraps to create fill in fabrics.

I purchased two charm packs on my shop hop and as I started putting this row together, I decided to incorporate some of them.  The block shown above started with the 5" charm square in the center.  Because I had already trimmed the small printed pictures, I had to enlarge the charm square to be the same size.  I used some scraps to to this as shown.  It looks pretty good just laying on my mat but the little strips on the border of the block are too narrow.  They get lost in the design when it is sewn into the row.  I won't do this again.  If I decide to use this block again, I will trim the charm square down some so the borders show up better.
So -- progress.  Two rows done but I need to come up with some ideas for separating these rows.
Time to put my thinking cap on!﻿
Posted by Georgia (www.crazyladyquiltdesigns.com) at 8:42 PM No comments:

Well as I fondled the fabric from the Quilt Minnesota shop hop, visions of quilt blocks danced in my head.... what to do with these printed panels and coordinating fabrics.  Well, obviously I have to make some blocks!  Remember though, I don't want any waste.   Aha!  Patti Anderson's No-Waste Flying Geese method to the rescue!!!

Here is the link to the most spectacular method of making flying geese EVER!!!

Keep this sheet handy because the way they are written you can make absolutely any size flying geese you want!

Here are the step-by-step photos of my No-Waste Flying Geese. 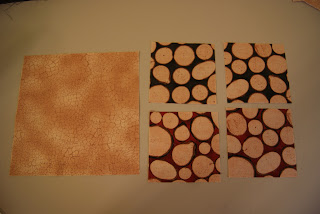 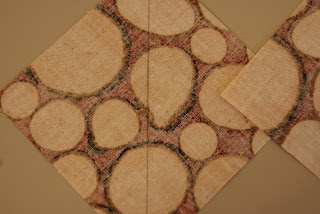 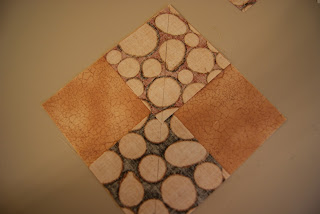 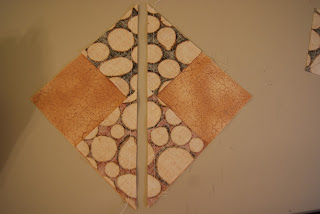 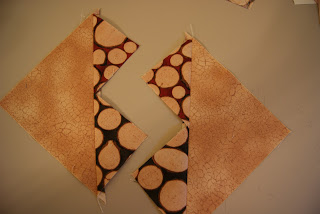 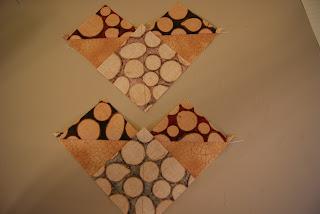 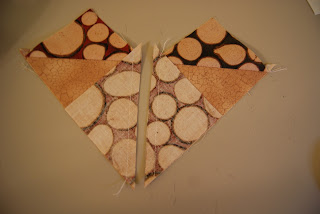 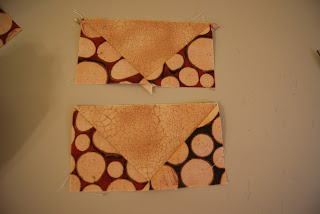 This method results in 4 perfect flying geese that are just the right size because the cutting directions begin with the measurements.  I wanted my geese to be 2 1/2" high and 5" wide finished size.  That means at this point they measure 3" x 5 1/2" because of seam allowances.  So I cut 4 corner squares 3"x3" and trimmed my 5" printed panel picture to 5 1/2" and laid them out. 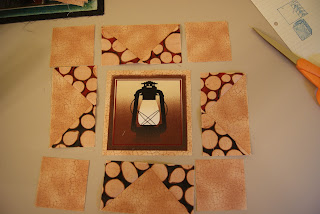 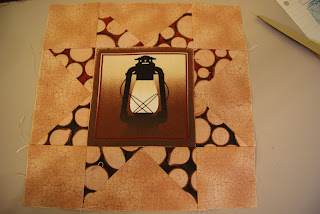 TA-DA!!!
Posted by Georgia (www.crazyladyquiltdesigns.com) at 6:20 AM No comments: 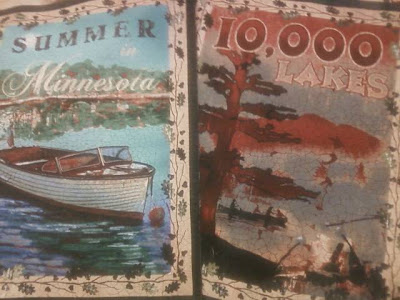 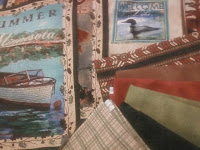 The fabric for Quilt Minnesota 2012 is all about the outdoors -- obviously.  We love our little piece of the world up here and with 10,000 lakes, boats are a given.  Our state bird, the loon, is also a featured player.  I really like the woodsy feel that these fabrics bring every year and I faithfully purchase some of these Northwoods themed fabrics every year.  Since they are outdoorsy all the way, the quilts I make with these fabrics tend to go to the men in my family.

Because fabric costs have risen quite a bit this year, I didn't purchase as much fabric as I have in years past on my annual Shop Hop.  This means I have to be a bit more frugal when it comes to actually making my blocks.  I want to get at least a full-size quilt out of the yardage.  I know I have enough to do this, but there can be absolutely no waste.

So, here's my challenge to myself.  I am going to create this quilt with as little throw away as possible.  Since I'm working with printed panels with 11"x15" and 5"x5" pictures, I may be biting off more than I can chew...

Posted by Georgia (www.crazyladyquiltdesigns.com) at 5:14 PM No comments: